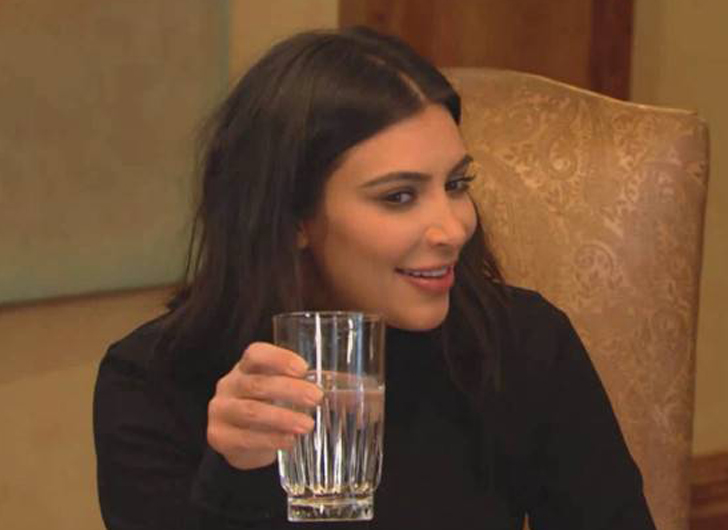 Source: Keeping Up With the Kardashians

They may be surrounded by over-the-top Hollywood parties where drugs and alcohol abound, but these ten celebs decided at a young age indulging in alcohol was not for them.


Although sisters Kourtney and Khloe may indulge, reality star Kim Kardashian has said in the past she hates the taste of alcohol and rarely drinks. Her teetotaling ways may be thanks to her dad, Robert Kardashian. Kim revealed to Bravo host Andy Cohen her dad taught her how to drive when she was 14, so she could be the designated driver while big sister Kourtney went to parties.

Ummm. Thank you @jacquieaiche 😱😍😱 holy cow!! 💎🐄💎 (and thank you sis @robynlively for the balloons!) I'm totally gonna lie and tell everyone I'm turning 30 every week.


Blake Lively may have played wayward characters in the past, but in real life this actress steers clear of booze. Blake has revealed she doesn’t care for the taste of alcohol, nor the effects it has on her – but she does have one caveat. This accomplished chef does like to cook with alcohol!


There may be a good reason why J.Lo looks so youthful for her age – she rarely drinks! The gorgeous singer told Instyle, “I think it ruins your skin” although she added she will take a celebratory sip during a toast.


The British pop star has revealed in the past she has never been a fan of alcohol and “hates” the taste. When she does need a celebratory toast she does it with non-alcohol champagne.

Have a bangin’ Friday night! 💛


Tyra decided after having a sample of alcohol at the age of twelve it just wasn’t for her. “I feel like I’ve been very lucky because I don’t have an addictive personality,” Forbes reports Banks told fans. “I’ve never had any drugs, and I had a little taste of alcohol when I was 12 years old, but that’s about it.”

Back! Still chilly outside but warms the heart. I ❤️ NYC…


Kim Cattrall’s character, Samantha Jones, on Sex in the City may enjoy seducing men with the help of a couple of cocktails, but in real life Cattrall pretty much steers clear of booze, revealing alcohol gives her horrible headaches.


Hudson claims she has never had an alcoholic drink. The talented singer and actress revealed in an interview with Chelsea Handler, “I’ve never been interested.”

Thanks @balmain @kcdworldwide for inviting me! @marcusrfrancis & @stephensollitto made me into a glittery Robert Palmer music video lady.

Thinking about all the tea I’m gonna spill…..


Griffin revealed to Healthy Living magazine she has never had a drink in her life, revealing, “I don’t need to loosen up anymore!” The comedienne also said growing up in an Irish Catholic home, “I just kind of looked around and they’ve already done this for me.”


Sober Aussie rapper Iggy Azalea has revealed in the past that during a night out with friends she’s always the boring mom, telling EntertainmentWise, “I’m always the one that has to hold a girl’s hair, because I’m the sober one.” Iggy avoids alcohol and drugs, admitting, “I’m a professional. I keep myself separate from everybody else and there’s not pictures of me going out to clubs and stuff.”