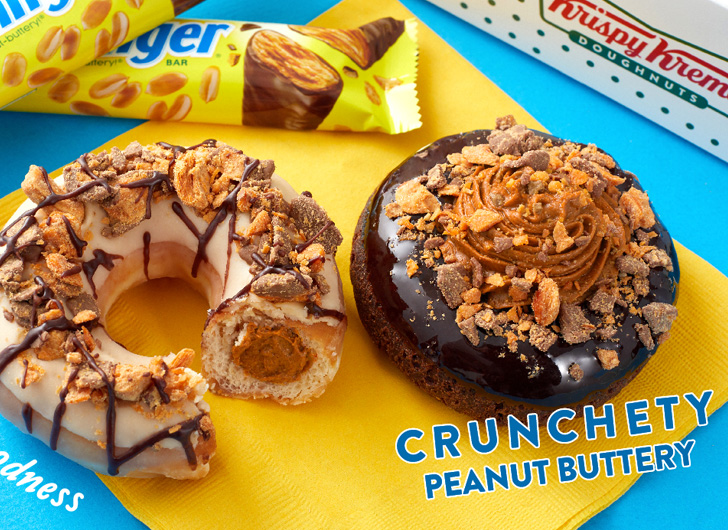 For a limited time only, Butterfinger candy bar fans can get their hot little hands on a Butterfinger-inspired doughnut thanks to Krispy Kreme’s collaboration with the candy bar maker.

According to Southern Living, Krispy Kreme and Butterfinger have partnered up to concoct a truly scrumptious doughnut featuring all of the Butterfinger flavors we can’t get enough of.

#KrispyKreme meets @Butterfinger! 😍 A cravable collision of Krispety & Crunchety! This is a duo you don't want to miss! 🍩🍩 In participating US shops through 3/13! All info at link in bio. #Doughnuts #krispetycrunchety

Option one, the Butterfinger Original Filled Doughnut, will feature an original glazed doughnut filled with Peanut Butter Chocolate Kreme, which is then dipped in Butterfinger icing and topped with a sprinkling of Butterfinger pieces and a drizzle of chocolate.

A collision has happened! 🙌 The Light & Airy #OriginalGlazed #doughnut meets Krispety & Crunchety @Butterfinger! 😍🍩 In participating US shops through 3/13! All info at link in bio. #KrispyKreme #KrispetyCrunchety


“We’ve done it. We’ve achieved our goal of putting krispety, crunchety, glazey, chocolatey and peanut buttery all in a doughnut,” said Dave Skena, Chief Marketing Officer for Krispy Kreme in a company press release. “Fans of both brands are going to love the chocolatey crunchiness of Butterfinger matched with the airy sweetness of Krispy Kreme.”