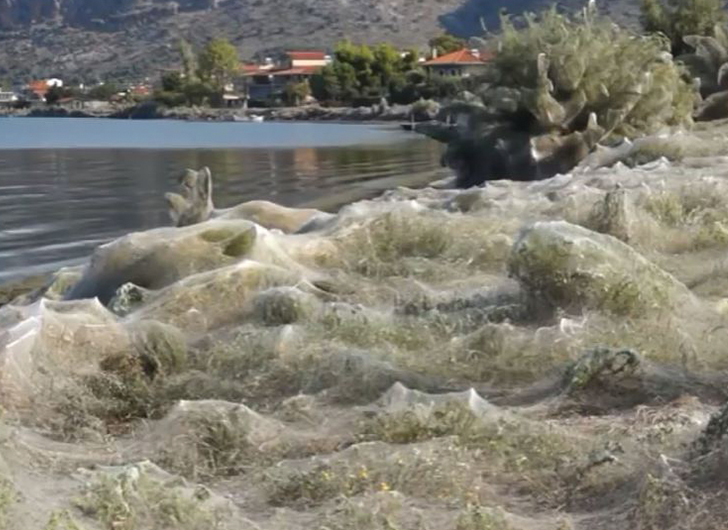 No Halloween decorations are necessary for one beach town in Greece, which is covered in giant spiderwebs.


Aitoliko, in Western Greece, has come under siege by spiders of the Tetragnatha genus, who have left dense cobwebs along the beach – some 300 meters long – according to the BBC.

Every arachnophobe’s worst nightmare, the spiders responsible for the spooky webs are known as stretch spiders, due to their elongated bodies, and are able to run across water faster than they can on land, the Guardian reports.

Thank you for sharing: @bryce_bobby – Repost @foxnews: "Thousands of spiders have covered trees, bushes, and seaside vegetation in spiderwebs along the shoreline of Aitoliko, Greece. The spiders seem to be spurred into overdrive by an explosion in populations of insects they eat." —— #jesusiscoming#jesusislife#messiah#lordoflords#jesus#kingofkings#jesuschrist#withgod#repent#saviour#yeshua#rapture#jesusislord#jesusistheway#biblical#bible#lordoflords#jesusismylife#mylord#endtime#endtimes#christian#greece#spiders#aitoliko#spiderwebs#signsofthetimes#endoftime


Scientists believe the unprecedented phenomenon could be due to a larger than normal population of mosquitos and gnats – favorite foods of the spider, thanks in part to hotter than normal temperatures.

“It’s the simple prey-predator phenomenon,” Greek biologist Fotis Pergantis told CNN. “It’s the ecosystem’s natural reactions and once the temperatures begin to drop and the gnat populations die out, the spider populations will decrease as well.”